Hello Aspirants, This reasoning quiz part 7  is useful for you ,  If you are preparing for sbi clerk 2018 exam. Answers are provided at the end so that you can assess yourself perfectly.

Direction (1-5): Study the following information carefully and answer the questions given below:

1. Who is sitting opposite to Rakesh ?
A. Rishabh
B. Rishu
C. Riya
D. Rahul
E. Can’t be determine

2. Four of the following five are alike in a certain way based on their positions in the given sitting arrangement and so form a group. Which is the one that does not belong to the group?
Rishu , Rakesh
A. Rahul, Riya
B. Rekha, Rishabh
C. Rimmi, Rekha
D. Rajesh, Rimmi
E. Rakesh, Rishu

3. Which of the following is not true according to the position Riya?
A. Rjesh sits to immediate right of Riya
B. Rahul sits opposite to the Riya
C. Rimmi is fourth from the left of Riya
D. Riya is facing West
E. Rekha sits immediate right to Riya

4. How many persons are between Rishu and Rajesh, if starting from Rajesh in clockwise direction?
A. Two
B. One
C. Five
D. None
E. Three

5. If Rahul interchanges his with Rekha and Rimmi interchanges with Riya then who sits immediate left to Rimmi?
A. Rahul
B. Rishu
C. Rekha
D. Rajesh
E. Rishabh

Direction (6-10): Study the following information carefully and answer the questions given below:

8. ‘ma gi fa’ could be the code for which of the following ?
A. Create thoughts and
B. and ideas new
C. ideas and thoughts
D. ideas or thoughts
E. None of these

11. Conclusions:
I. No paint is dye
II. All paints being varnishes is a possibility.

12. Conclusions:
I. Some varnishes are paints.
II. No dye is a color.

Statements:
All squares are triangles.
No triangle is a circle.
All circles are rectangles.

13. Conclusions:
I. No rectangle is a square.
II. All rectangles being squares is a possibility.

14. Conclusions:
I. No square is a circle.
II. At least some circles are squares.

Statements:
No paper is a book.
Some books are libraries.

15. Conclusions:
I. All libraries being books is possibility.
II. No library is a paper. 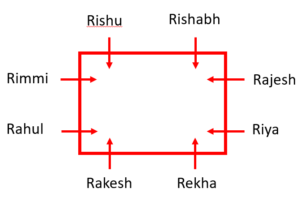